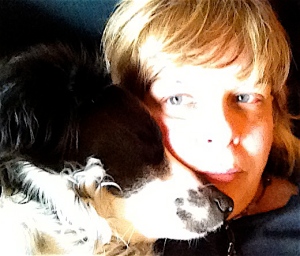 Born in Melbourne, I live there still sharing a slightly shambolic household with husband, son and dogs. I was the inaugural Watermark Literary Fellow and have since had residencies at Bundanon and Varuna. My novel, The Grasshopper Shoe was shortlisted for a Commonwealth Writers Prize – my poetry manuscript Rare Bird was shortlisted for the Alec Bolton prize.

If I could take myself anywhere in the world it would be to Klovharu – Tove Jansson’s summer house. I grew up being read and reading her books about Moomintrolls. As a teenager I read The Summer Book and the Finnish islands of Bredskar and Klovharu are a part of my internal map. Klovharu is no more than a rock – a speck in the ocean, taking less than a minute or two to circle. A step to the north and a step to the south and you would be in the sea. Tove and her partner, artist, Tuulikki Pietila built the house themselves, provisioned it lovingly with books, coloured cookpots, beach pebble paperweights, gull feathers in a vases, patchworked curtains and bedcoverings – it’s spare, rustic, seemingly shaped by wind.

For 28 years they boated out to it, carrying candles, cake, water and rye bread biscuits. They caught their own fish and swam, painted, read and wrote. It is my very ideal of summer. Of life really. When the time came when they could no longer make the journey, they swept the floors, wrote a letter detailing the idiosyncratic nature of the stove, the chimney, and rockpools and left the note and the house key on the kitchen table.

It might be one of the smallest house museums in the world but it speaks volumes to me.

Why does one walk or play music? Because it keeps us sane is probably the truest and most basic response. But then there is the fact that I am probably one of the least organized people in the world  – and my mind’s eye is equally disordered. I think my visual compass is not unlike an insect’s multi-surfaced eye. I deal with fractions – increments but seen at magnification. Colour and form collide in my head. It can be distracting. Writing brings some sort of equilibrium to this internal chaos. Writing is a machine – it imposes systems. Writing is my method – it’s a sort of yoga for my brain.

The word
Singing was my first passion and music was everywhere in my childhood. My sister played the clarinet, I began with the violin, later the flute. Our mother played the piano every day. I can remember lying behind the upright and later under the baby Yamaha grand. The music could shake your teeth loose.

Songs, rhymes, chants came first. Reading came later. I was eight before I was reading well. I was mostly busy outside before then. I collected rocks and tree sap. I had the idea that I would make a museum from my finds. Life was full.

Mrs Pepperpot’s Busy Day was the first book I read to myself. But by the time I was ten I could not have lived without books.

On being an obstacle
Detail is both a fascination and a curse. I love research. I make notes longhand. I love the accoutrements of the trade – paper of various weights and shades – I prefer unlined although graph or dotted is good. I like ink, fountain pens, types of nibs, pencils, mechanical pencils – .7 lead is best – better than .5 which breaks too easily. I like notebooks too. An American stationer makes a pocket sized book called Field Notes – it’s a facsimile of a farmer’s jotter – the kind given by agricultural agents to their clients. The page is ruled in a faint blue grid, it repels water, fits neatly trouser or coat pocket, it has a ruler printed on the inside cover  ….see how easily I can be distracted?

I work slowly. The snail is a household god to me.

I love the library. I love that they trust me with their books. I miss the card catalogue though. The see and see also references in a card catalogue were a sort of physical stream of consciousness – the loose connections of the subconscious made manifest. In my head I see a cobweb – where each strand of silk intersects with another is a see or see also.

I’m easily distracted by asides, laughter from another room, by reading recipes, by letter writing, conversation. I love to listen to the radio when I am drawing or sewing  – in fact I find the work goes along more easily for it. But I find any sort of noise an interference to writing. It helps to have the song in your head the one you want on paper.

Note to self and other writers

Samples of Carolyn’s award-winning poetry, The Passage of Water is among my favourite poems. I read it often and never tire of its beauty and haunting power to move me.

It is late July –
ice winds follow the chalk ridge
and already two suns have looped over her bracken bed.

Night feeders visit her
their routes familiar with her cheek slope
her finger bridge,

moths fur blindly at her open mouth
beating their soft heads at her teeth
their whiteness a candle in the tree gloom.

Ants criss-cross
her feet like small cuts –
she is already in the kingdom of flint and winking mica.
Chemical vapour escapes her lips and nose and

although her lungs are slack
her chest rises
flesh shifts under her shirt.

The slow stink
of wet rot calls other creatures from the night –
jaw loose earth shifters,
their eyeless work riding a bell of warm air under the sod.

calls a man hooped over all of a sudden
knowing she will not call back.
Torchlight licks over tree roots,
stones, dark blots of burrows.

A year from now
he will hold her in a dream
where their hearts knock together like stones.

She will speak his name,
step through the sod wall,
her shoes fashioned from mud,
a clay bonnet fit over her skull.

Three nights
in cold July and he has criss-crossed the ridge
a damp plaster of leaves on his cut feet.

never fully to recover –
to understand.

His lips to the bedrock,
like a mole he eyelessly sinks a pistol of light,
shifting the earth in cupped hands,
willing the distance between his cries and the underworld to be less.

She is at most only a hundred feet from where he is digging
on the far side of a small chalk lip hidden by trees.

But already the earth has a claim on her small bones,
minerals call to the juices in her fizzing gut
their chemical language more subtle than blood bond.

She sits now on a chalk chair, dust at her table
sucking the thin wafers of night food.

The earth’s water climbing towards her
through sediment,
gravel, rock,
the blue rot of tree waste.

Drawn as by salt
to crust and sparkle beneath her,
speaking to her own waters,
working the stiff skin, the set sap,
cutting a ditch to join the great waters
that slide back towards the sea.

You have all of your life to learn to be Santiago
but lesson one is to know that even your smallest finger has god in it,
that birds call your name and stars were invented for your pleasure.

Know that you are your own country
and we are pilgrims
on the way there.

Your language is a sparrow’s song –
all vowels – consonants come later.

Your mother studies this dialect
while you read

from a self-inventing dictionary –
all exclamation and imperatives.

Hunger is your first job and you do it well.
But today your verb is simply to be,
love is your only learning so far and it is enough.

Welcome
to our tin pot planet small Buddha,
your smile is exactly the polish that it needs.

This entry was posted in Poetry. Bookmark the permalink.