“I want to write poems that people want to roll around in, get dirty, and come out the other end tarnished, spent, and a little less alone.” 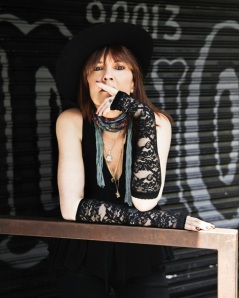 Alexis is another exciting poet I met via social media.  It was over an American GI we both ‘unfriended’ the instant we sniffed a scam. We started talking poetry and I found her bold and sassy style refreshing. At the same time I discovered her photography and passion for the arts. There’s a great interview and photos here where I learned a lot more about Alexis, including what we have in common; we both saw Hendrix live on stage in the Sixties and acknowledge how much music and art informs our writing.
http://blues.gr/profiles/blogs/la-poet-photographer-alexis-rhone-fancher-talks-about-the
And speaking of the man, Alexis was the first person in the US to buy my collection, When I Saw Jimi, and she generously featured my work in Cultural Weekly soon after.

Congratulations are in order right now because her first collection, Losing my Virginity to Michael Cohen is about to hit the world, and I know it will arrive with blood and heart. Alexis has been nominated for two Pushcart Prizes. If you want to know who Michael Cohen is, just ask.

I want Louboutin
heels with those trademark red soles,
I want them sexy, I want them high.
I want them slingback and peep-toed
so I can flash the purple polish
on my tootsies.

I want to wear them out of the store, just
you try and stop me.
I want to wow them on
Washington, saunter past C&O Trattoria
and Nick’s Liquor Mart, those bottles of Stoli
stacked in the window, calling my name, past the
summer-clad tourists in December, shivering,
barefoot, like LA has no winter.

In those shoes I’m hot,
stop-a-truck hot, prettiest
girl in school hot, and this
time, I know it.

Flaunt it. Hell, I own it. In those shoes I can
pick and choose, not settle for some loser.
Not drink away regrets, pound back Stoli at
Chez Jay’s, flash their scarlet bottoms when I kneel.

Better those shoes with their lurid soles
than you with yours.

first appeared in BoySlut, nominated for a Pushcart Prize, 2013

Now the splinter-sized dagger that jabs at my heart has
lodged itself in my aorta, I can’t worry it
anymore. I liked the pain, the
dig of remembering, the way, if I
moved the dagger just so, I could
see his face, jiggle the hilt and hear his voice
clearly, a kind of music played on my bones
and memory, complete with the hip-hop beat
of his defunct heart. Now what am I
supposed to do? I am dis-
inclined toward rehab. Prefer the steady
jab jab jab that reminds me I’m still
living. Two weeks after he died,
a friend asked if I was “over it.”

As if my son’s death was something to get
through, like the flu. Now it’s past
the five year slot. Maybe I’m okay that he isn’t anymore,
maybe not. These days,
I am an open wound. Cry easily.
Need an arm to lean on. You know what I want?
I want to ask my friend how her only daughter
is doing. And for one moment, I want her to tell me she’s
dead so I can ask my friend if she’s over it yet.
I really want to know.

Alexis Rhone Fancher’s work can (or soon will) be found in Rattle, The MacGuffin, Carnival Literary Magazine, Fjords Review, Cliterature, The Chiron Review, Good Men Project, Deep Water Literary Journal, Broadzine!, Poeticdiversity, This Is Poetry: Women of the Small Presses, Gutter Eloquence, Slipstream, The Mas Tequila Review, H_NGM_N, and elsewhere. In Australia, her poems have been published in several anthologies put out by Blank Ruin Press, as well as in Fierce Invalids, A Tribute to Arthur Rimbaud, published by Blind Dog Press, and she’s been a repeat guest at Little Raven. Alexis’s photographs have been published worldwide. In 2013 she was nominated for two Pushcart Prizes. She is poetry editor of Cultural Weekly.