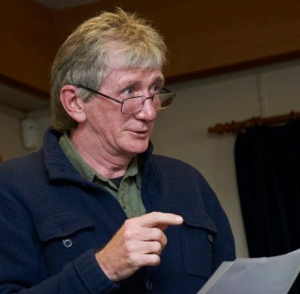 In June 2013,Terry and I met for the first time at Digbeth Bus Station, Birmingham, as joint winners of the Geoff Stevens Poetry Prize (Indigo Dreams) and on the eve of launching our big collections.

I’d come from Melbourne, Australia. He’d come from Preston, Lancs, although he told me later he was born in Brum, a few streets away from out launch pad. I’d been at teachers’ college with a recent honorary degree from Brum Uni so all a bit of an uncanny coincidence. I hated Brum in my youth-a shithole of a city, all concrete and horrible accent.The day Terry showed me the new Brum I was brought to my knees. I loved it.

We’d been emailing our hopes and fears for months organising out joint launch at the Oldbury Rep. By the time we met I felt like I’d known Terry all my life. We met again in Bristol, my home town, in June this year, the day after Banksy’s latest was posted in Bristol Museum. We had a great day when I got to appreciate and love my city for the very first time. Terry is the kindest and funniest poet at a time when humour is at a premium in the poetry world. On the eve of launching my second collection and remembering our joint win of the Geoff Stevens prize, I am very happy indeed to bring you the wit and wonderful whimsy of Terry, friend and co-poet.

And she’s gone.
I can’t tell you where
or when she’ll be back.
But here’s a few clues.
Here’s her ski boots,
there’s her woollen sweater,
here’s the scarf I bought in Prague
and there’s the ballgown
I’ve to take to the cleaners,
precise instructions attached.
Well you don’t need a ballgown
when you’re off to fight in the wars.
Not that she’s fighting.
She’s there for the wounded,
she’ll strip the bloody clothing
from any bloody skin
and stripping an assault rifle
was taught as a precaution.
A precaution against what?
I know against what.
All those jerks finding themselves,
shooting into manhood,
those guys know what they want
and it’s not TLC from a blonde.
I wandered into the kitchen
getting a feel for emptiness,
putting her mug away,
it’s only a few months.
Finding themselves for god’s sake,
and then finding her,
ten quid in a tin hat lottery,
she just won’t get it.
And then I found the envelope,
under the phone,
the last Will and Testament,
left when I left her alone.

It’s getting to the point
of a small rearrangement
in how things were.
Not exactly a lie,
I did have a girlfriend,
she was called Eileen,
and she did, does, live in Hammersmith.
But she didn’t,
as far as I know,
drive a Ferrari
into the lake at Kew Gardens
after an argument
about a duel I’d fought
with Simon Armitage
about her honour
or the placing of a comma
in the Dead Sea Poems.
One or the other,
it doesn’t matter.
The point is that these days
you need an edge,
a little something
that’s hard to find
in another poem
about finding your Father’s pipe
or a lost letter from a lost love
about snow falling on Blackburn
or a night spent talking
about that Al Gore film.

2 sheep plus
3 goats plus
1 bushel of wheat
equals what?
I don’t know,
I don’t even know what a bushel is
and neither did these guys in Uruk
who had a bit of a problem
explaining that one of their goats
had already been sold
to a bloke from Lagash
and they only had enough tokens left
for three jars of oil
and this stupid sod from Kish
still didn’t get it
till they pressed them down
on a bit of clay
which seemed to help
so they did it again
just to show off
to their mates in the pub
and would you believe it
it caught on
and the next thing is
they’re selling the farm
doing whole tablets of the stuff
so their neighbours
could count whatever
while they charged a fortune
then putting in security
after the not so stupid
son of the sod from Kish
scraped a sheep shape
off the waxy surface
which they couldn’t prove
so they baked them
which stopped that nonsense
and then got a bit cocky
adding symbols they made up
for this girl in Umma
they both fancied
till her Dad replied
using even clearer signs
that he’d also made up
so they made some more
and before you know it
there’s scrabble and lawyers
and Carol Ann Duffy.

Terry Quinn born in Birmingham and is now living in Preston, UK, has travelled widely through the UK, Europe and the Middle East. A former engineer he is the author of ‘Away’ and ‘The Amen of Knowledge’ (published as joint winner of the Geoff Stevens Memorial Prize; Indigo Dreams). In 2014 he was one of the winning entrants to the Royal Academy’s Ekphrasis poetry competition, the Guernsey International Poetry Festival competition and the BBC Proms Poetry Competition. He co-presents the Arts Scene Show on Preston fm. He follows Birmingham City Football Club.

This entry was posted in Poetry and tagged competition poetry, humour in poetry, irony, love and loss poetry. Bookmark the permalink.