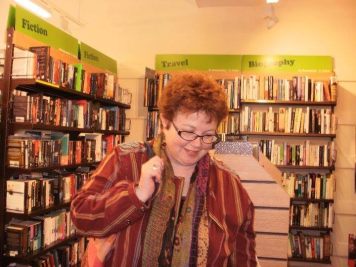 The first review of your first book is the one most anticipated, most dreaded. In 2013, after the launch of my debut collection, When I saw Jimi, I wasn’t thinking as far as ‘reviews’ until three months later when editor John Murphy alerted me to a thoughtful critique of Jimi in his online journal (The Lake) and for all the world to see. It was by Pippa who made me realise that the business of publishing and poetry was serious and exposing.

She seemed to like aspects of my work but also drew attention to flaws in the more abstract pieces and quite rightly. Since then I have been more considered in thinking about what it is I am really trying to say and to avoid unnecessary obfuscation. It was a valuable lesson for a new poet. I also appreciated being reviewed by a well-respected and assured poet like Pippa, whose own work appears in places like Poetry Review, TLS, and anthologies like Best British Poetry.

Pippa’s narratives are abundant, compassionate yet restrained and true. She has an eagle eye and soul for the essence of things as in her poem Cobbles, which makes you view a single element of nature through new and penetrating eyes.

Pippa’s latest chapbook, Our Lady of Iguanas, takes you to Mexico. It is to be launched on March 9 at The Lit and Phil Library, Newcastle, UK. http://www.theblacklightenginedriver@hotmail.co.uk

Sole passenger on an early morning tram
I’m half asleep when the driver brakes,
dashes past me, dives into a copse of trees,
gone for so long I almost get out to walk.
Then he’s back, his face alight.
I saw the wren! Explaining
how he feeds her when he can
and her restless, secretive waiting.
We talk of things we love until the station.
I tell him of the Budapest to Moscow train
brought to a halt in the middle of nowhere,
everyone leaning out expecting calamity
but not the engine driver, an old man,
kneeling to gather armfuls of wild lilies,
wild orchids. He carried them back
as you would a newborn, top-heavy, gangly,
supporting the frail stems in his big, shovel hands.
These are small things, but I pass them on
because today is bloody, inexplicable
and this is my act, to write,
to feel the light against my back.

‘Against Hate’ is in Hands and Wings: Poems for Freedom from Torture, ed. Dorothy Yamamoto, Foreword by Philip Pullman, White Rat Press, 2015 (raising funds for Medical Foundation for the Care of Victims of Torture)

She is grainy cornfields I remember up beyond our house,
glowing on the hillsides I never reached
through late summer sunsets: long shadows in slow burn,
that longing to be somewhere else
where my life could begin. So much faster
than I expected, here I am, mothering a dog in our middle-age
who slips out of herself, supple as thistledown
every season, almost-white chaff lifting in tufts,
for whom love is this wordless touch, the weight
of my hands. I plough shadows in and smooth them out,
remembering light pollen-sticky on my skin,
waiting for that sensed world to come.
Not how I thought it would be
or enough, yet warm, rough, loose,
more than I needed.

I love walking them late rainy nights,
their slippery fish-scale sheen lit from within,
love to listen to their mutter under my bootsoles,
how they unbalance me
yet hold –

they came from reefs,
languorous and murky, settling slow
in a warm mineral broth
studded with trilobites, flurried
by silver tail-to-fin-to-tail
oozing into stone

and now
like shoulders in a crowd or
a house of cards, delicate
weight with counterweight,
each one alone yet borne along in shoals,
they roll me home.

Pippa Little was born in Tanzania, East Africa, grew up in Scotland and now lives in Northumberland in the North East of England. She was given an Eric Gregory Award and the Norman MacCaig Centenary Poetry Prize, is a Hawthornden Fellow and also a Royal Literary Fund Fellow at the University of Newcastle upon Tyne. She teaches, edits and runs workshops. Her collection Overwintering, from OxfordPoets/Carcanet Press, 2012, was shortlisted for The Seamus Heaney Centre Prize. She is working on another collection. Her latest chapbook, Our Lady of Iguanas, is from Black Light Engine Room Press. She has three sons, the eldest of whom is editor of The Ofi Press in Mexico City, a husband and an elderly yellow lab.

Links to Pippa’s poems and an interview online