Review of my collaboration with Terry.

To Have to Follow: Julie Maclean & Terry Quinn, Indigo Dreams 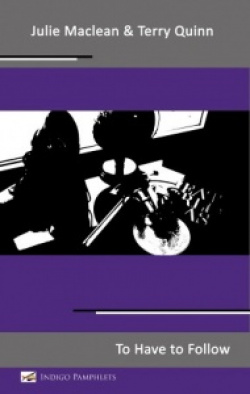 Collaborations between poets are interesting and, in the age of the internet, becoming more popular between poets from different countries. In this case, the collaboration comes from two writers who have certain things in common (they were both born in England and share a love of poetry and travel) but now live thousands of miles apart – Julie Maclean from the Surf Coast of Victoria, Australia, and Terry Quinn from Lancashire in England.

Malcean and Quinn were joint winners of the Indigo Dreams inaugural Geoff Stevens Memorial poetry prize, with their collections being published in 2013. After launching their books together they remained in contact, and then decided to start using each other’s poems as triggers. This collaborative pamphlet contains 24 poems, (12 by Maclean and 12 by Quinn), written as response pieces. In each of the pairings Maclean’s poems appear first, which suggests that Quinn is always the responder – but this need not necessarily be the case. The way the poems are set out means that we will never know.

The title sounds like a fragment from a sentence suggestive of “I am going to have to follow that with this” or, in the context of food, the dessert that follows on from the main course. Even when the phrase appears in the very last poem it is still somewhat elusive in terms of its meaning – a man following a woman into a medieval building.

The content is global in its reach: there are references to planets, oceans, seas, continents, countries, geology, glaciers, the Ice Age. The images on the cover are redolent of travel and exploration. Some of the locations are firmly grounded in England: Stonehenge, Bristol, Birmingham; sometimes they are more specific such as a cinema or a dental surgery. Other locations are harder to pin down with any certainty. There are literary references to RM Ballantyne, Thomas Hardy, Lewis Carroll, Robert Louis Stevenson, Joan Didion and Emily Dickinson.

At the end, once I’d arrived, swallow from the south,

I barely recognised my bird father. It was his pecked look.

The ribs of his cage beat a hymn rhythm on his heart.

It wouldn’t stop, like some wind-up toy you tire of,

His djembe throat drummed on while I sat and held his

Maclean’s “Brief Encounter Poet to Poet” is a visual poem that describes half a circle or half a globe, which is almost the distance between them.

Quinn’s poems are spiced with a quiet, erudite wit. They are gems waiting to be discovered. Poems such as ‘The Rules of Detection’ which is split into five parts headed up by the questions Who / What / When / Where / Why? and ‘Statements of Accounts’ are cleverly written with attention paid to detail. The poem ‘Seven Seas’ which is set in a dental surgery is equally well-crafted:

This shouldn’t be difficult

as the problem of the Atlantic

I open my mouth

should I move my tongue

dipping into the Med

Finding the connections between each pair of poems is half the fun of reading them. Sometimes they can be found in the titles; in one instance the words in the last line of the first poem become the title of the next poem. Sometimes it is the time of year, or a theme. Occasionally it is a phrase or even a single word that is repeated across poems, a literary reference, or a particular feature in the landscape that is picked up on. The links are subtle and not too obvious, and this is one of the strengths of this collection.

Julie Maclean and Terry Quinn, To Have to Follow, Indigo Dreams, £6.75

This entry was posted in Blog. Bookmark the permalink.

2 responses to “Review of my collaboration with Terry.”