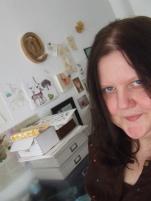 Kristy is not only an accomplished writer and visual artist but also Editor/Designer of her own publishing enterprise,  Dancing Girl Press and Studio which publishes pamphlets of contemporary poetry by women. If you read her interview on the Harriet blog of the Poetry Foundation you will see that she has ‘proclivities for strange and quirky books, …books that have some sort of darkness to them.’ I should admit here that Kristy has recently published my pamphlet, Lips That Did, and she also generously designed the cover which I adore, but I am not the only Australian she has published. I see that Ivy Alvarez and Alyson Miller are also in the mix.

Kristy’s poetry is visceral and jumping, and makes its business the mess between birth and death. Women will get it, like the titles of her books in the bird museum and girl show, books that ‘deal with feminist themes of danger and transgression, the female body…’ There is a retro sensibility and painterly quality to her collages and you can easily feel she’s tracked your life and written every aspect of it. 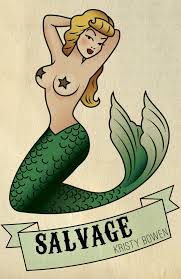 from The Care and Feeding of Mermaids

Don’t worry about the bathtub, the bits of scale and hair
caught in the drain, a little more each day. Only a fool
would weather the storm at the northernmost point. She’ll
still be good in bed. Adept at karaoke and drinking mai
tais from glasses shaped like cats and dragons.  Can
probably name every crustacean by blind touch, her
fingers seeking out each grooved exoskeleton in the dark.
Warning: The vapor of her breath against the mirror will
make you anxious. The way she winces over the sashimi
and cries in the shower. At night, she’ll slip out to meet
men in hotel bars downtown, sneak into the pool after
hours, call you at 3am begging for a ride home. Do not
acquiesce. Especially on nights when the fog settles low
on the water. Especially when the stars above it line up
like a million tiny fish.

At night, the fission loves us, lathers us over,
makes our teeth glow like  low watt lanterns in the dark of our beds.
This town is all carhops and canapés these days, the women
narrow waisted and waspish.  Oh nostalgia, we love it.
Write letters to it in the green light of television sets.
Meanwhile, the  men set fire to the jukebox, the junior college,
the dead pigeons in the gutters of tract homes.
Oh hope, oh love, we’re filled with sugar and seething
into our silk pantyhose. Our bodies as pristine as our
mother’s whites, flapping on clotheslines across the low hills.
In an emergency,  above all else, keep calm.
In an emergency, keep your tongue glued fast to the roof
of your mouth to avoid screaming.
In an emergency–

When his says father says boo, plutonium baby cries all night.
The milk gone bad, leaking and souring in the folds of his mother’s
nightgown. 3 am and the world glows with him, even now,
before the bombs, before the backyard barbecues and shiny
black sedans. Before the open mouth of his wanting grows
wider and wider and swallows everything not weighted down..
When he’s grown, he’ll take up with women named
Tina, or Charla, or Tiffany. Will tuck his shirts in and talk
about stock commodities.  Everyone loves a plutonium baby,
all new and shiny as the chrome on a brand new bicycle.
As American as apple pie or insider trading.
He’ll twirl the scotch in his glass around and say things like
“Key West is a sauna this time of year..”
Those kind of manners could be lost or poisoned or dead
for all we know. His black shoes, shiny and sure of it.

It’s months before she can recite the alphabet backwards
again. Birth dates. The chemical equation for hydrogen peroxide.
All caught in the foggy nether than begins somewhere in the cerebellum.
On the patio, all the bodies in bikinis float in a thin soup of chemicals
and it’s all good, all gone,  all going to hell in an alligator handbag, she thinks,
her fingernails  flaking away like piecrust. These limbs loosening into ether.
In the hospital, the sheets were white and precise.
Her mind white and precise.  She clenches her jaw and meditates
on milk cartons, lined up single file on the store shelf.  The perfect slices
of bread dropping into the toaster. Scratches on her thighs and breasts
where the bees went in, and worse, where they demand to come out. 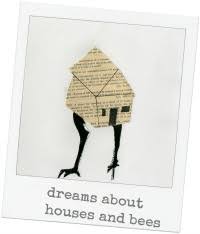 A writer and visual artist, Kristy Bowen is the author of six books of poetry, including the recent (Black Lawrence Press, 2016) and (Sundress Publications, 2015), as well as a number of chapbook, zine, and artists book projects. Her work has appeared most recently in Paper Darts, Handsome and Midway Journal. She lives in Chicago, where she runs dancing girl press & studio and spends much of her time writing, making papery things, and editing a chapbook series devoted to women authors. Her most recent collection, little apocalypse, is forthcoming from Noctuary Press. http://www.kristybowen.net