‘Oh Lord make me pure-but not yet’ Let’s celebrate…

…the  release of this new pamphlet from the Picaro Poets series.

Songs of the Godforsaken
by Geelong poet
John Bartlett.

I found myself moved, amused and affected by the poems in this marvellous collection. You will be taken to that fiery night in Mallacoota, to the eye of a heron in a blackened landscape, to a back garden in London where a migrant’s life comes to a tragic end and to the Bourke Street Lotto. You will go to private sensual places.

John’s poems are sinewy and beautiful on the page. They have the sensuousness of the Baroque in form and style. Each poem skilfully crafted, the works artfully curated and confident.

There are confessional poems and poems that question, Will I surrender to the drug of memory, Is that how I will find my way home? and in the title ‘What would I say ‘ to the father for ‘not loving him enough’.

Some lines are arresting, God will always demand the sacrifice of small children. John’s experience with the church in a past life has made a lasting impression on him and infuses his work. It’s given him an evocative mastery of language. It may have given him a dry sense of humour. It’s certainly given him an ability to note injustice, joy, beauty in destruction, ugliness in ignorance, the power of transformation, and a yearning for what is denied— innumerable lovers. And in the last lines of the collection the question of his unfinished life makes for a dramatic finale.

Schubert’s symphony, his seventh,
Unfinished too.

Can its single, final note
surf the years, proclaiming

-‘who do you think you are
to escape unscathed?’

It is with loud clashing cymbals and a bottle of expensive champagne I smash the bow of this book and bless all who get lost in enchantment and awe between her lines! 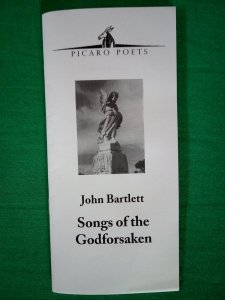 She’s back again this year
in heels and nuptial plumes,
coquettish
in pale eye liner
-the white-faced heron
selecting twigs,
thinking of survival
What rush of rapture
bursts
-these birds
designed from
templates of dinosaurs
with songs that shiver
in the deep wells of the soul
So, despite
the cracking ice
in Greenland, the rift,
the cleft, the split,
the speld

Despite the smell,
the stench, the stink
of burning forest,
I see you still,
framed
by cross-thatched  leaves,
your changing of the guard
with stilt-stepped stealth,
this private pact
between you,
this brooding hope
triumphant.

A Year of Masks

Spring/Hong Kong
Anonymous, yet uniform
in our disguises, we
wear our false faces
crafted in the basements
of our outrage               against
tear gas & elimination

Summer/Mallacoota
On days the sun refused
rise, we
huddled on the edges
of our nightmares,
lives burning, gasping    in
smoke & suffocation

Autumn/Wuhan
White-robed, masked Archangels
engrossed in ceremonies of ablution, we
ration out each breath
from hostile air, as if
breathing less might save us
from extinction

Winter / the world
In that other room without pretences,
we mock our other selves
happy to dwell under the dark clouds
that herald every rain
surviving in some eternal
expectation

The disobedience of the Genitals
(“Oh Lord make me pure – but not yet.”)

In 400 AD, or thereabouts, Saint Augustine prayed
for a thirty year delay on his ejaculations, waxed
eloquent (&endlessly) on the “disobedience
of the genitals”, their unexpected ability,
their agility to leap into alacrity at
short notice, fig leaves, he knew
were not a short-term solution,
absolution a necessity,
suppression a
better option, so
henceforth flesh &
spirit, like a firewood
log split in two,
a smashed
egg’s yolk a
broken heart
irreconcilable,
irredeemable
irreversible
irreparable
irretrieve
-able

John Bartlett is the author of three novels, collections of his short stories and published non-fiction. His poetry has been published in a number of Australian and overseas journals.  In June 2019 Melbourne Poets Union published his Chapbook The Arms of Men. Ginninderra Press has just published Songs of the Godforsaken as part of its Picaro Poets’ Chapbook series and will publish his full collection Awake at 3am later in the year. He was recently shortlisted for the Ada Cambridge Poetry Prize.

Songs Of The Godforsaken