Six weeks ago it all started going bad. A weekend with the girls took me to Sydney where the Grayson Perry exhibition was on. It was all good, brilliant really, including a walk from Bondi to Bronte and the Waverley cemetery with Henry Lawson in residence. 37 degrees was a tad warm but we barely broke into a glow. But within hours we’d gone from artistic revelry to Cheapstar aviation hell. Five hours in Sydney airport with Bloody Mary’s at $16 a pop. All because of a bit of thunder and lightning.You’d think Sydney would see enough of that to dodge the problems and keep planes airborne. No.

When I finally got back home where nothing looked changed from five days before, the man announces he’s ‘done his back’. That could have been annoying except it gave me a good chance to get to the op, charity, thrift shops to source him a proper chair. And this is what I found. A wavy Shaker-style chair that might have been in Nelson’s cabin. It’s in my lounge room now but so lovely I wont let him sit in it. Just needs a bit of paint stripper and back to blonde. A steal at $30 and nobody will ever get to sit in it. 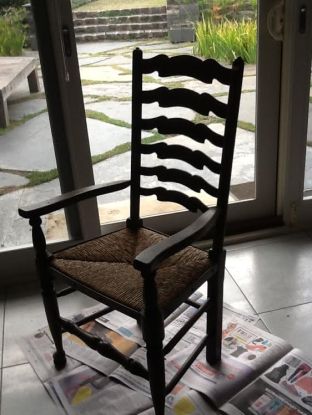 Trouble is he’s had major surgery so not mobile and sleeping a lot. A bit like having a baby at home and we know what that means. Three hours to yourself in the afternoon. I took the thinking time to come up with an idea for a book cover for my new book. Our new book, actually. It’s a pamphlet that UK poet Terry Quinn and I have been working on for the last year. They’re reply-poems which we’ve called ‘To have to Follow.’ Terry is from wet, wild and woolly Preston, Lancs and I’m writing from the Surf Coast, Victoria so diametrically opposed weather wise. But we were joint winners of the Geoff Stevens Poetry Prize (Indigo Dreams) and have kept in contact ever since as mentors and friends. I’ve fiddled with the image so it’s abstract but you get the idea. we both like a bit of travel whenever we get the chance. I dug out the man’s old hiking boots complete with cobwebs and found my old Readers Digest Atlas. I must remember to make it nothing like Kei Miller’s.

I’m looking forward to poems coming up in Poetry Salzburg, Under the Radar (16 already out) and Cordite. Poems currently in Plumwood Mountain thanks to Tricia Dearborn.

In the meantime there’s a whiff of autumn in the air and the need to revamp some old clothes and bling. I’m going androgynous Tilda Swinton this year. Have been buying lots of browns and tans from local op shops. Spent this morning repairing earrings and shoes.Badly. Brown pinstripe trilby to go with everything. Looking for a feather.

2 responses to “Bonkers in op shops”